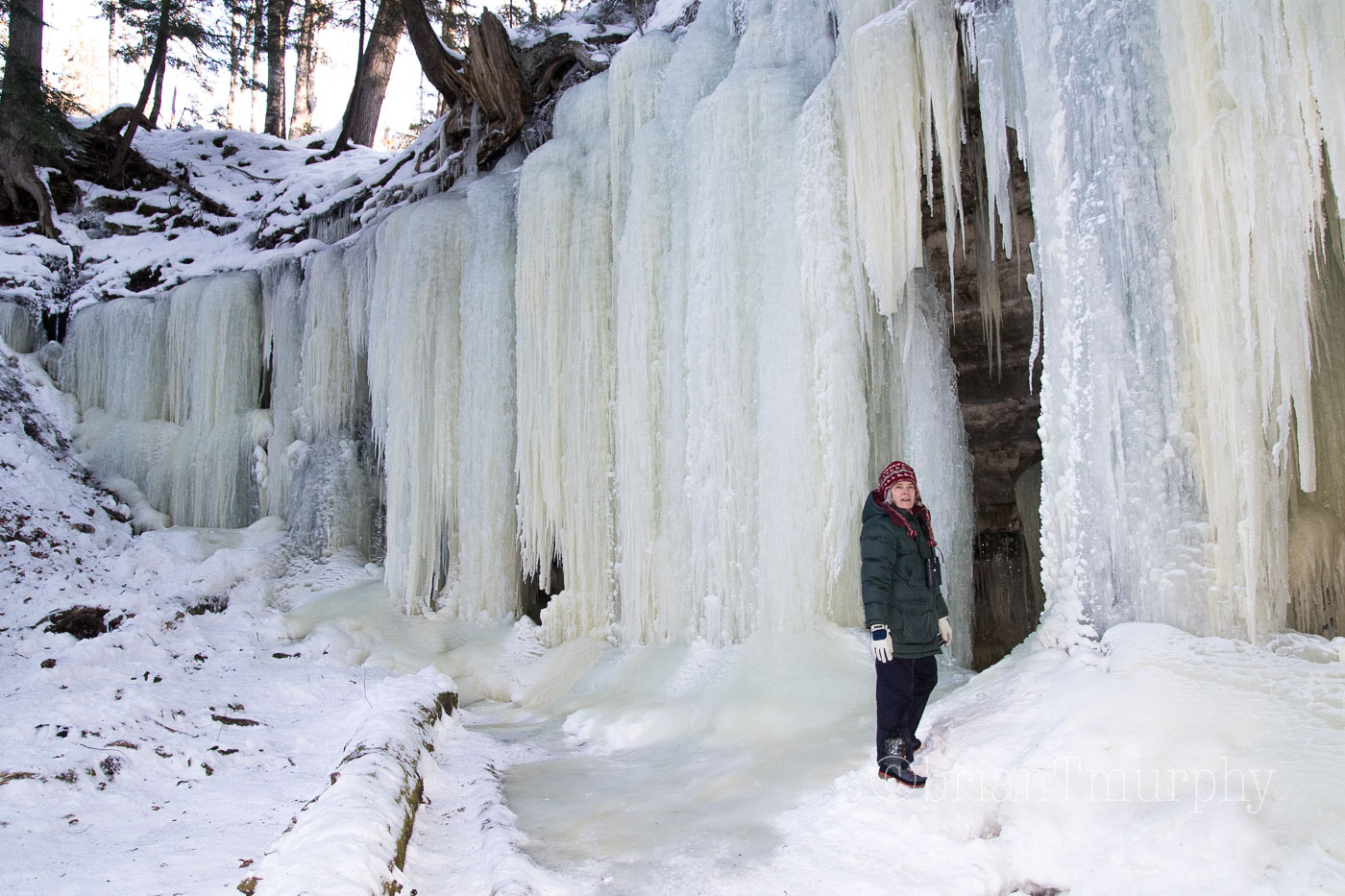 We had a leisurely departure from Durham on December 21, pulling out of the driveway about 11 am.  A planned breakfast at Krankies in Winston-Salem turned into a lunch affair, then we headed North. The drive up through Virginia and West Virginia was beautiful, thankfully the destruction of entire mountains in the name of coal mining is hidden from the interstate.  We arrived at our overnight destination, Staybridge Inn, in Dover, Ohio, about 7pm.  Nice place, decent free breakfast, and then off we went toward the snowy fields of Michigan.  Once we got to Ann Arbor the ground had a thin covering of snow under very grey skies, and the temperature fell consistently along the way. We knew what was to come, subzero nights and sunny, cold days.

We pulled off the interstate in Gaylord, MI to eat dinner at a place we discovered last summer, The Bearded Dogg.  Very good food, warm and comfy inside, the staff and customers were very friendly people.

It was very cold the next morning, about 10+, and so we slept in. After a free breakfast, we took a quick tour of the waterfront and then went shopping in downtown Mackinac City at Mackinac Clothing.  We both needed just a few more winter clothing items for the upcoming Arctic adventure.  Then it was time to get down to business, finding SNOWY OWLS.  Taking advantage of our unplanned stop, we actually drove south to Cheboygan following the eBird postings for Snowy Owls in that area. Within 20 minutes of arriving, we were excited to find two Snowy Owls, one pictured here on top of the pole.  Then, again following eBird postings, we located Snowy Owl number 3 on the Soo Locks billboard along Interstate 77.

The remaining drive to Barbeau was simply beautiful as the freshly fallen snow glistened in the low northern sun.

In Barbeau Christmas Eve morning we relaxed at the breakfast table with Mom and Dad Sliter, watching the giant freighters cruise down the partially frozen St. Mary's River. 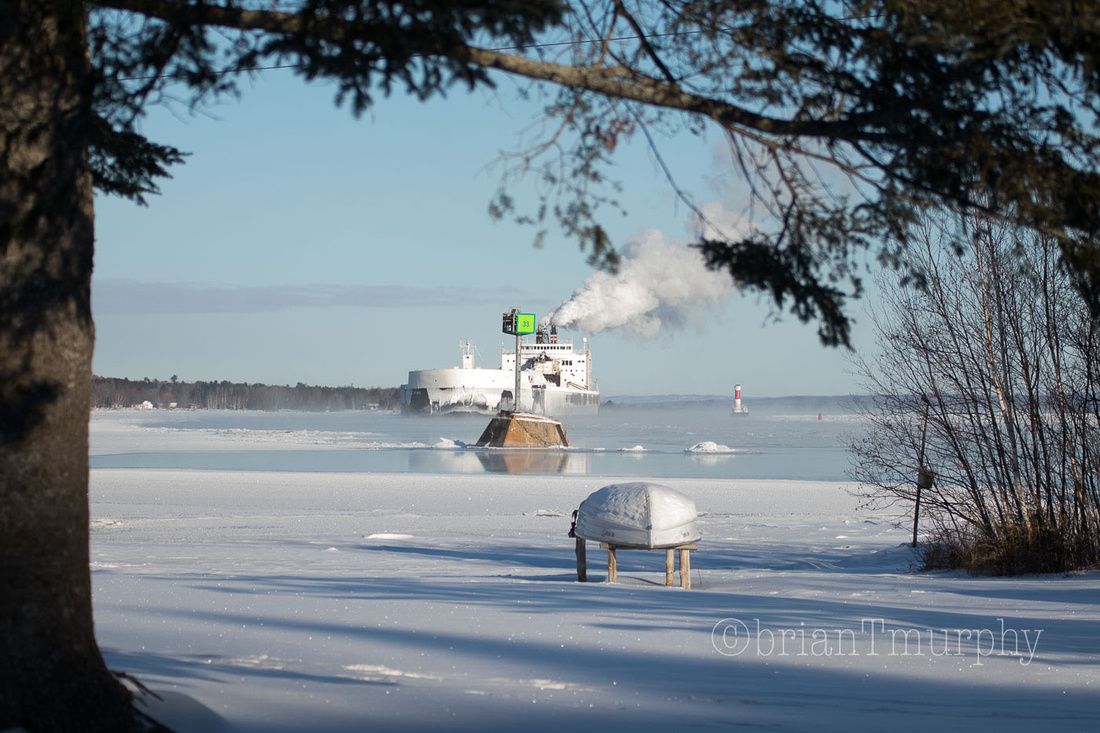 After 1,000 miles driving we really needed to get outside for a walk so we headed down to Dunbar Research Forest.

I won't mention how cold it was too many more times on this blog but that morning it was -2F. After warming up we loaded our stuff back into the car and headed for Christmas, Michigan, to spend a few days with Sheree's brother, David Paul, and Karen and the four girls.

Along the way, we took a short detour into Seney National Wildlife Refuge. It was very quiet and snowy.

We had to find the house in the dark, on Reindeer Drive. (yes, really)  After dinner, wrapping of gifts, and card playing with Stephanie we hurried off to bed so that Santa would not pass us by.

Christmas morning, on Reindeer Drive, in Christmas, Michigan, was a  flurry of bows and wrapping paper and smiling faces, and some excellent French Toast.  And it was nice and warm inside, but we decided to head out for some adventure and better cell connections.

First, we headed to Munising Falls, and as you can see in the picture, it was not falling much.  Next, we took a hike along the Sand Point Marsh Trail, something we had also done this past August.  So quiet, so beautiful, so cold. We loved it.

Now, since we did not have wifi or cellular at the house, we spent the next hour at Sand Point watching winter take control of Lake Superior while we made some Christmas Day phone calls and Facetime.  I think the short video will say it all.

Quiet time back at the house, a delicious turkey dinner followed by more card playing and before we knew it Christmas in Christmas was over.  Time for a good night sleep to prepare for our ski adventure and a trip to the famous "Ice Caves".

So now it is getting really, really cold. In the photo above notice the vapor coming off the lake, it is frozen in mid-air.

On our way from Munising to Marquette, we took a side trip to the Ice Caves in Eben, MI.  It is a geological feature where lots of groundwater seeps out of the rock cliffs and freezes into really awesome walls of ice.  This was my coldest experience of the entire trip, mostly due to a lack of facial covering in sub-zero weather.  The hike was 3 miles round-trip and totally worth the discomfort.

Upon arriving in Marquette we ate a hearty early dinner at The Vierling Restaurant,  and there were no splitting of plates at this meal, we were starved!

For a nice change, we skipped over the local chain hotels and spent two night at the Landmark Inn.

Not to beat a dead horse, but the next day was really COLD and so we spent our day visiting cross-country ski locations, car birding, hanging out at Dead River Coffee, dinner at the Co-op and an evening tour of the library.

With temps warming into the positive single digits the following day we finally got to go skiing in Munising at Valley Spur, after which we visited Sheree's elementary school.

Once known as The Northland Hotel, the Landmark Inn has a history as rich and fascinating as that of Marquette itself. The Northland Hotel was first conceived around 1910. The foundation was laid in 1917, but the 100-room hotel itself did not open until January 8, 1930.

From the 30s through the 1960s, however, the hotel stood at the epicenter of the downtown Marquette social scene. Our guest history includes visits from luminaries such as Amelia Earhart (1932), and Abbott & Costello (1942), who stayed at the hotel during World War II when in town to perform at the American Legion. Today, the rooms where they stayed bear the names of these famous guests. Other famous guests include Duke Ellington, Louis Armstrong and The Rolling Stones.

After our ski in Munising, we headed back to Barbeau, again making a quick stop at Seney NWR for a few minutes of peace and solitude.  Over the next few days, we went snowshoeing, searched for Snowy Owls and other winter birds and spent time with Mom and Dad. It truly was amazing to see the St. Mary's River slowly freeze up, and to watch the Coast Guard ice cutter break up the ice, allowing the large freighters, some carrying iron ore from Marquette, to safely make their way into Lake Huron.

Sheree' and I had a wonderful time on this trip and look forward to returning to northern Michigan this summer.