After partially relocating almost half of our living quarters to Upper Michigan, we have spent the past few months back in North Carolina, our home for many decades. Over the past ten years, we have made a tradition of visiting the awesome birding locations in the northeast coastal plain of North Carolina, including Alligator River, Lake Mattamuskeet and Pea Island National Wildlife Refuges, just to mention a few.

This year we rented a cozy little flat in Nags Head for three nights. We began our trip early on the Wednesday before T-Day, traveling east from Durham towards Nags Head and making stops along the way at various ponds, farms and game lands including Vernon James Research Station, Beasley Road pond,  and Futch Gamaelands, but we got rained out by the time we got to Futch. No worries, the rain abated 30 minutes further east as we birded the first stop in Alligator River NWR. Best birds at Alligator - Sedge Wren, Lincoln Sparrow, Blue-headed Vireo, and thousands of Tundra Swan and Northern Pintail. 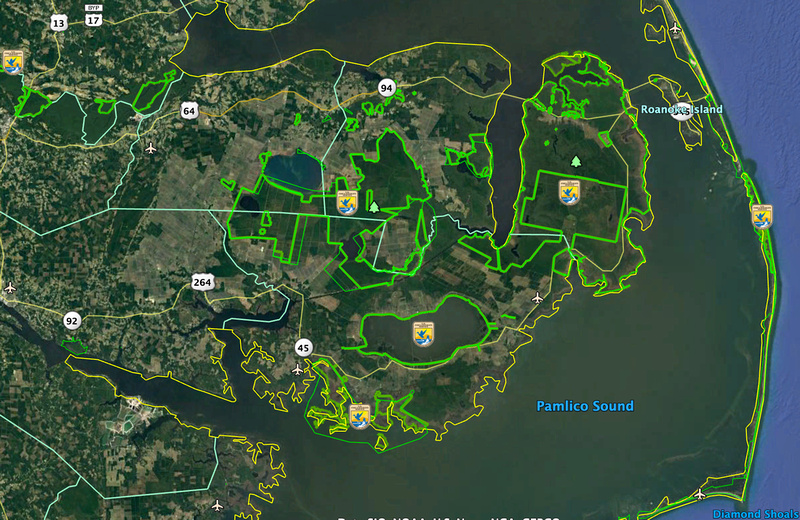 On Thanksgiving morning we headed straight south for Pea Island NWR. The early morning sun provides the best viewing of birds on the water. The wind was a  little gusty but we made the best of it and had a great time on a sunny, not too cold, OBX morning.  Birds?  There were tens of thousands spread out over the three main impoundments.  Highlights at Pea Island over two days - Eurasian Wigeon, Canvasback, Brant, White Pelicans, Avocets, Marbled Godwits, and thousands upon thousands of Redhead and Pintail ducks.  For all of our bird observations, check out eBird.

Later that morning we slowly headed back up north towards Nags Head, visiting Oregon Inlet and Bodie Island Lighthouse National Park. Both spots were very quiet so we headed to Jennette's Pier for some seabird birding. The wind was still an issue but there was a good flow of birds along the coastline.

Friday morning, with a windy day forecast, we headed inland back to Alligator River NWR, for some BEARING and birding. ARNWR has a large population of Black Bear and they can often be seen out in the farm fields in the early morning. We found this hefty boy/girl in a corn field near the county dump. 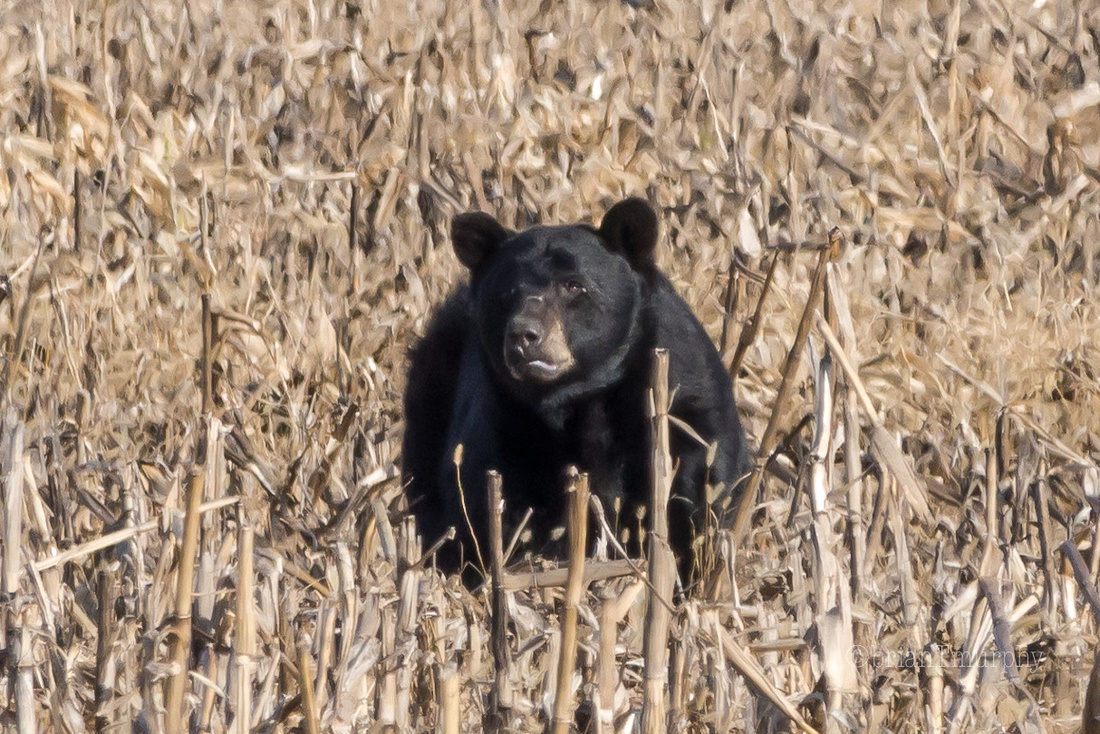 Saturday morning the wind was quiet so we headed to the pier immediately after oatmeal and eggs. It was quiet on the ocean but with mild winds and decent temps, we had a nice time identifying what did fly by. Best birds - Surf and Black Scoter, Parasitic Jaeger.

After 10 a.m. VRBO check out, we headed south to Lake Mattamuskeet.

Lake Mattamuskeet - a legacy in trouble

Since my first trip to LMNWR in 1973, as an ornithology student at N.C. State University, I have been in love with this lake and its surroundings. I won't go into a long description of its history but want to mention that the lake is mostly dead, the aquatic life, both plants and much of the aquatic fauna, have been (temporarily) degraded by water level issues and agricultural pollution from the large farms' that surround the lake. The lake used to be covered with swans, geese, and ducks in winters past, but now they only inhabit the edges and the surrounding man-made impoundments. 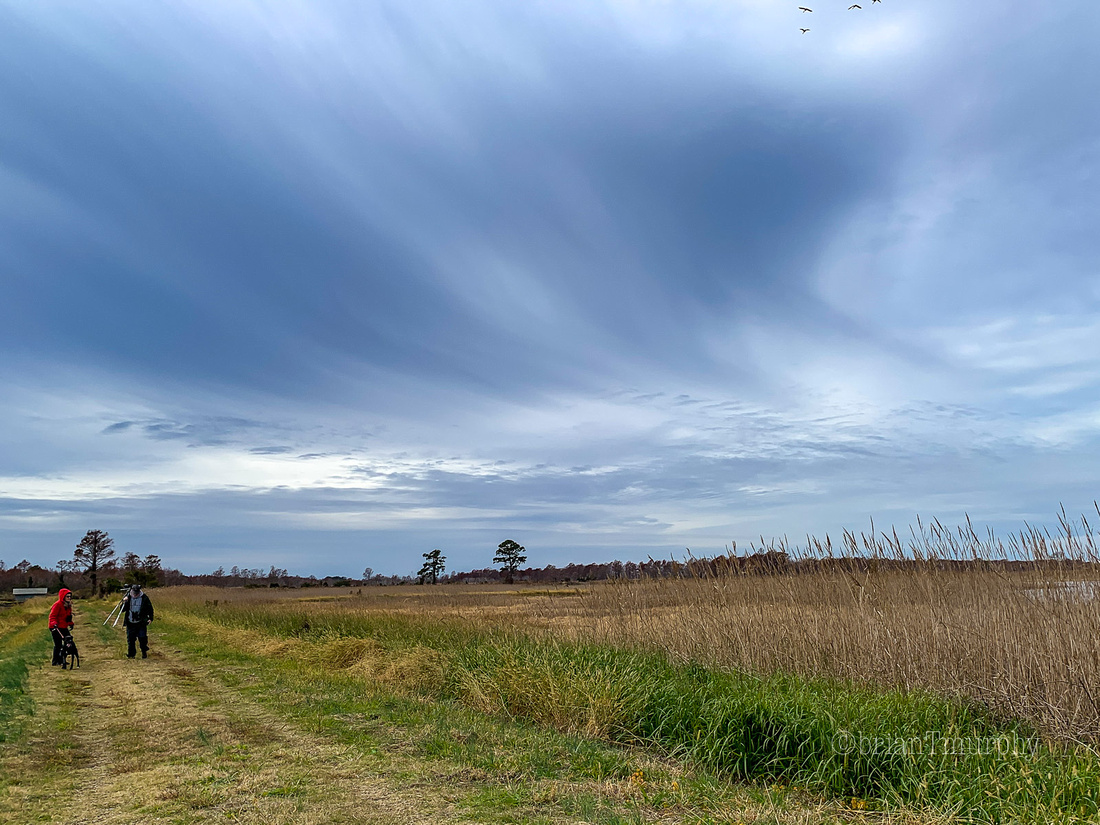 This is not to say there are not large numbers of waterfowl at Lake Mattamuskeet NWR, they are just not on the lake. In 2017, the North Carolina Wildlife Resources Commission, the U.S. Fish and Wildlife Service and Hyde County established a partnership and hired the North Carolina Coastal Federation to develop a restoration plan. That plan is now being implemented.
Now, to the birds. With overcasts skies, we did not have the best viewing but still had a wonderful time. It began with sighting huge flocks of Tundra Swans and Snow Geese on the drive down from Nags Head. Huge flocks! Thousands upon thousands, all-white birds against a grey sky. It was stunning. They were feeding in the large farm fields. Sorry for no pictures, we could not safely pull off the road.

Our first stop was at Lake Landing. Due to storm damage that took out a bridge we were denied access to some of the areas better habitat but still got close up to many birds. Towards the end of our walk down a dike, we stopped before spooking what looked like 4-5,000 birds in a good-sized impoundment. We had quick looks at both a Merlin and a Sharp-shinned Hawk, and lots of flyover Tundra Swans and an assortment of ducks, mostly American Wigeon.

Due to fading light, we had to cut short our exploration of Lake Mattamuskeet after a drive down and around the Wildlife Drive impoundments, which were loaded up with over 10,000 birds of assorted waterfowl species, dozens of Snipe, a Bald Eagle or two, one Harrier, a White-tailed Deer, and a few Nutria.

Over the three day period, we located 118 bird species.

CLICK HERE FOR A SLIDESHOW OF ALL THE IMAGES WORTH SAVING

The three-hour drive home was under mostly rainy skies but we were treated, ironically, to a very large flock of Wild Turkeys in a farm field near Belhaven, about 30 or more. They survived Thanksgiving, as did we, and we all can now look forward to more adventures in the wilds of eastern North Carolina, and Michigan. 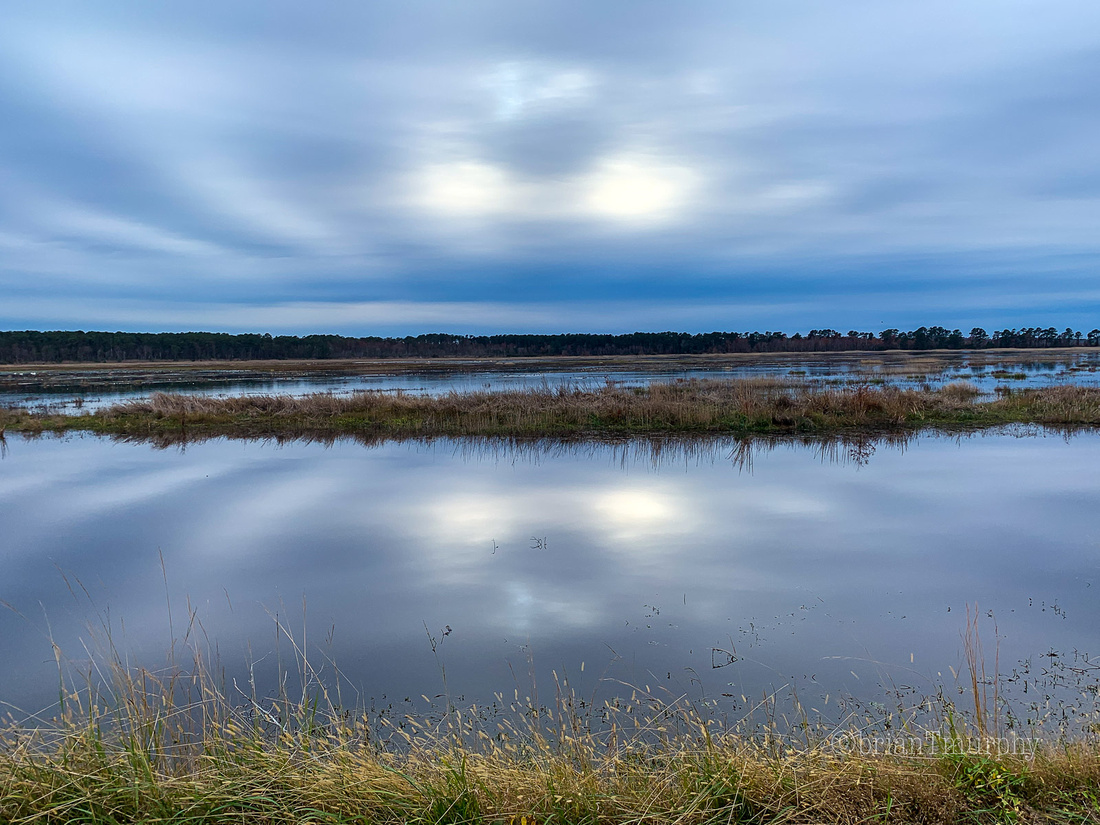 - The Upper Peninsula of Michigan in mid-December for a two-month hibernation. Ha! Stay tuned for winter adventures - winter birding, XC skiing, snowshoeing and Frosty making.  Please take a moment to leave a quick comment below. It makes us feel all warm and fuzzy inside.  And please visit, like and follow the Wild Places, Wild Birds Facebook page. Bird on!

CLICK HERE FOR SLIDESHOW OF ALL THE IMAGES WORTH SAVING

Linda M(non-registered)
Lovely photos! Looks like you all had a good time.

Will you write about your experience with the Sony RX10?

Wild Places, Wild Birds Photography
We would love to hear from you.
No comments posted.
Loading...
BIRDING RESOURCES