Peaking Colors, Falling Snow - Autumn in the UP 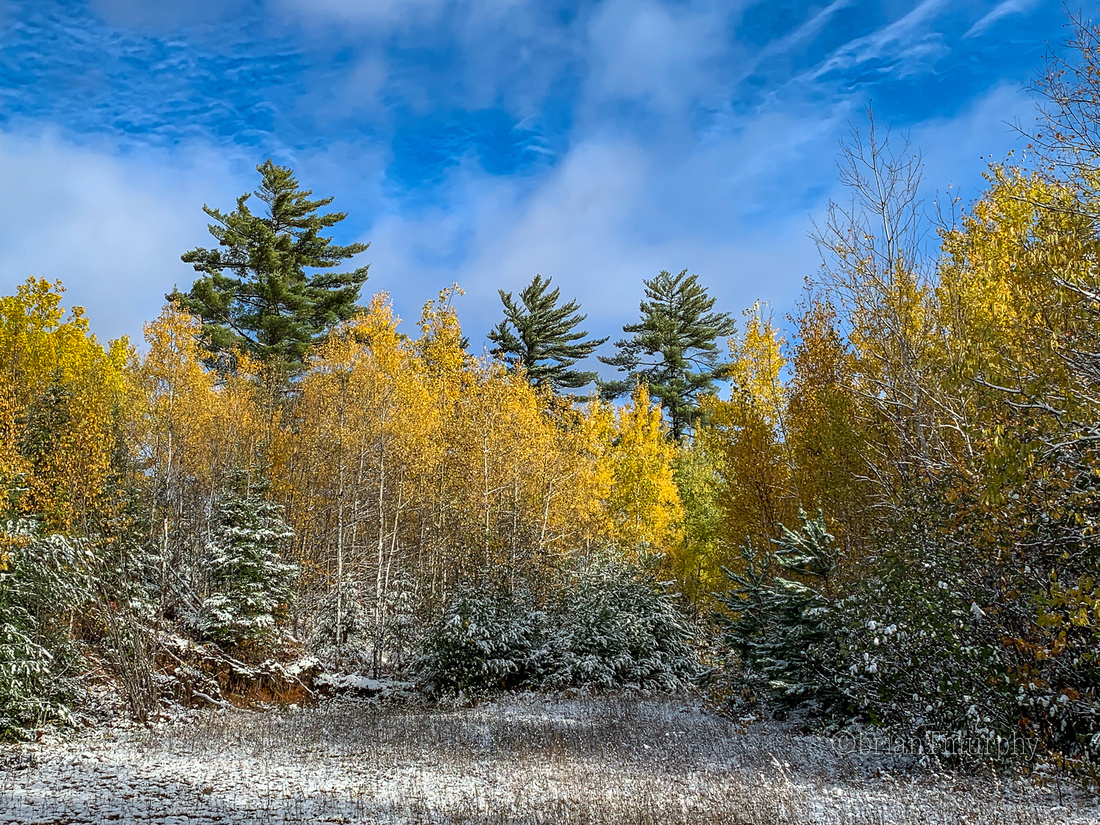 Headed west Sunday morning to look for some special birds (Boreal Chickadee and Canada Jay) in the beautiful autumn forests of the Upper Peninsula. The first thing I noticed, cars coming from the west had SNOW on them. October 13 must be the first day of winter in the U.P. The sky opened up to let some sunshine in while I drove west, but most of the day would be grey.  Here is a map showing the area traveled. The first set of pictures was taken along of and off of Hwy 41, followed by pictures along a 15 mile stretch of the Pesheskee Grade, and then McCormick Wilderness, just the area near the entrance.  I hope you enjoy this trip as much as I did, and no, I did not locate the target birds, this time. 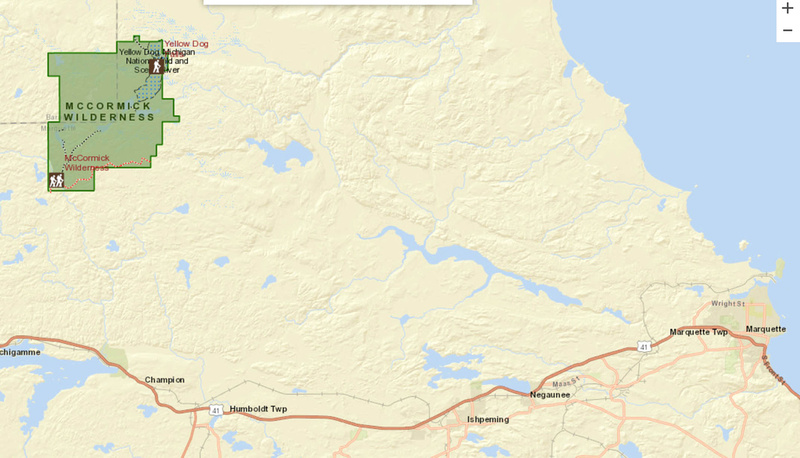 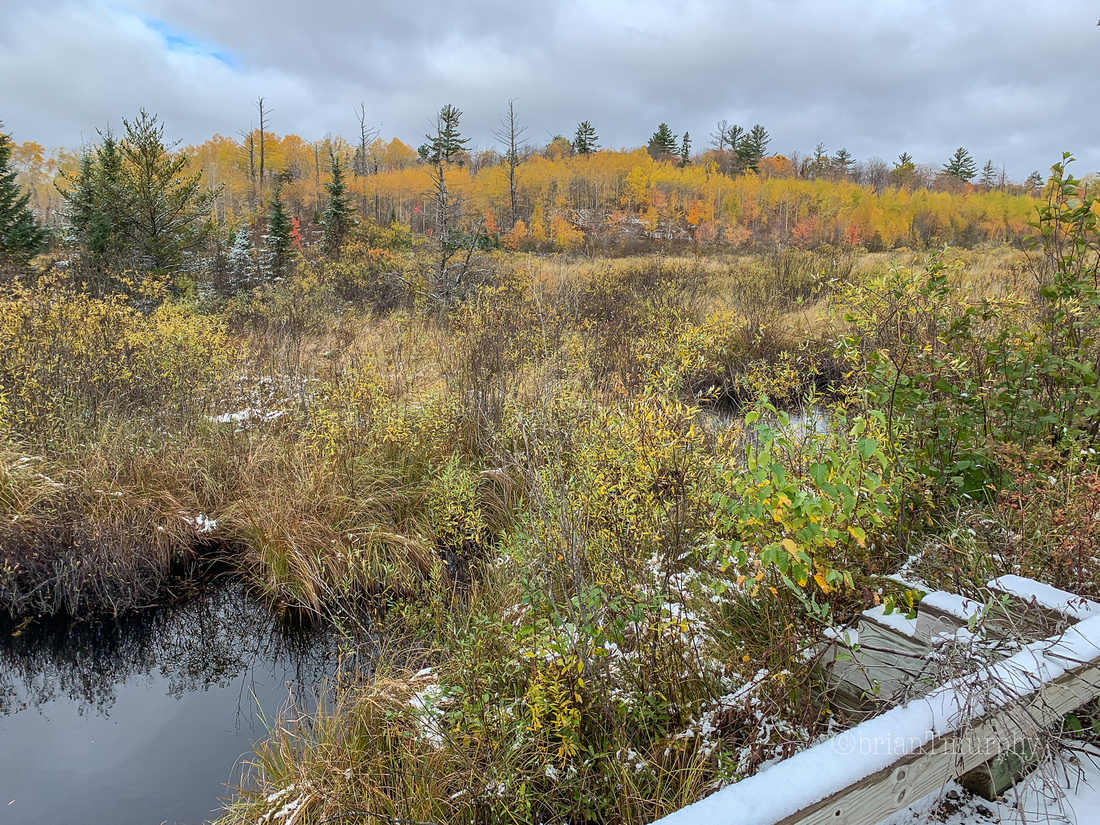 The Pesheskee Grade in a road, sort of, that travels north from Hwy 41 up through the lower-left corner of the McCormick Wilderness, and on into no-man's-land. I loved it! 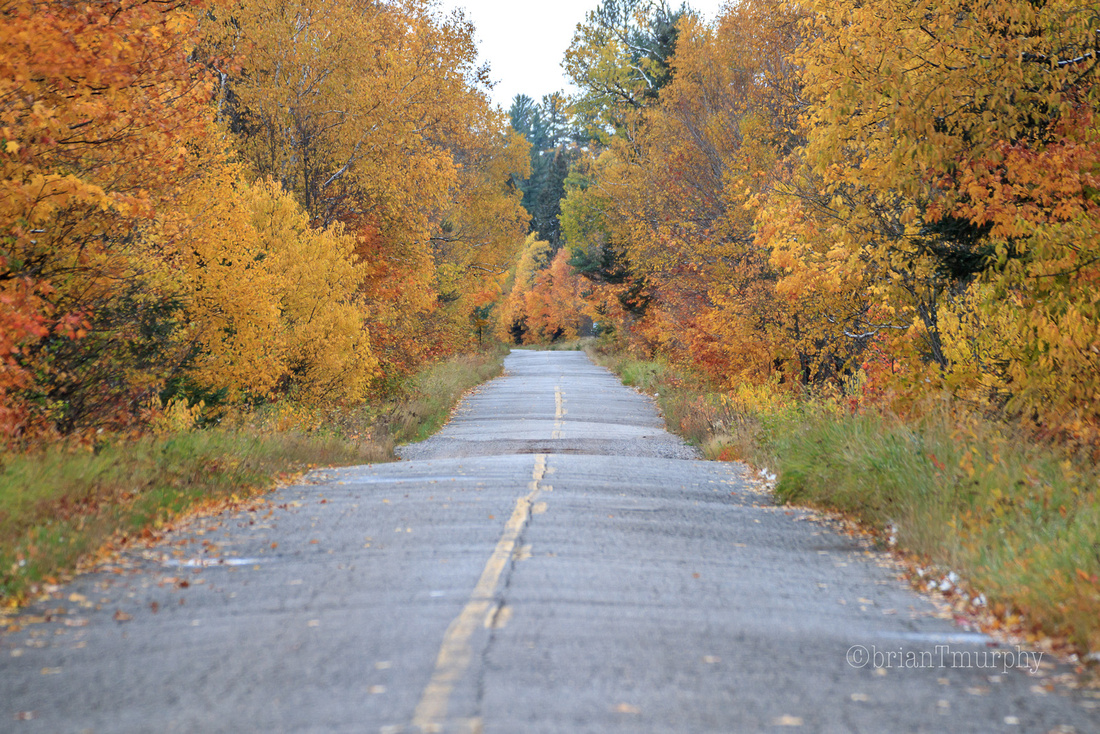 Important note : do NOT drive on this road in a low clearance passenger car 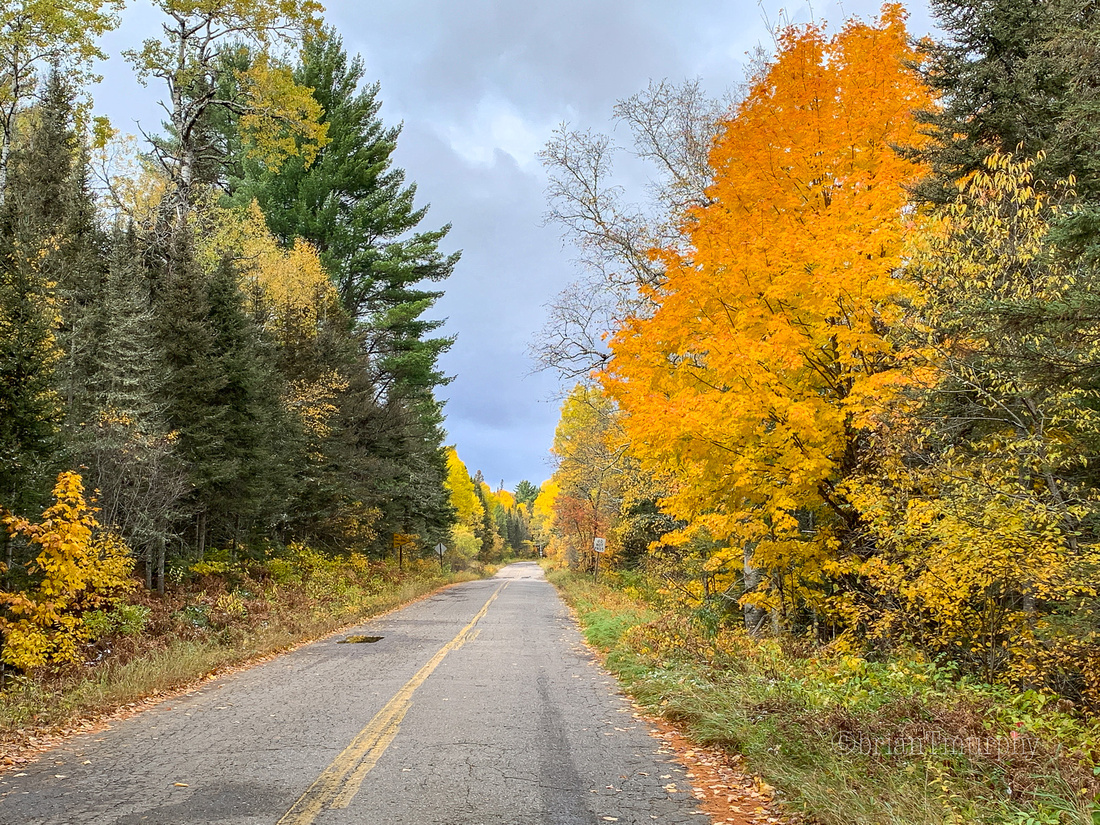 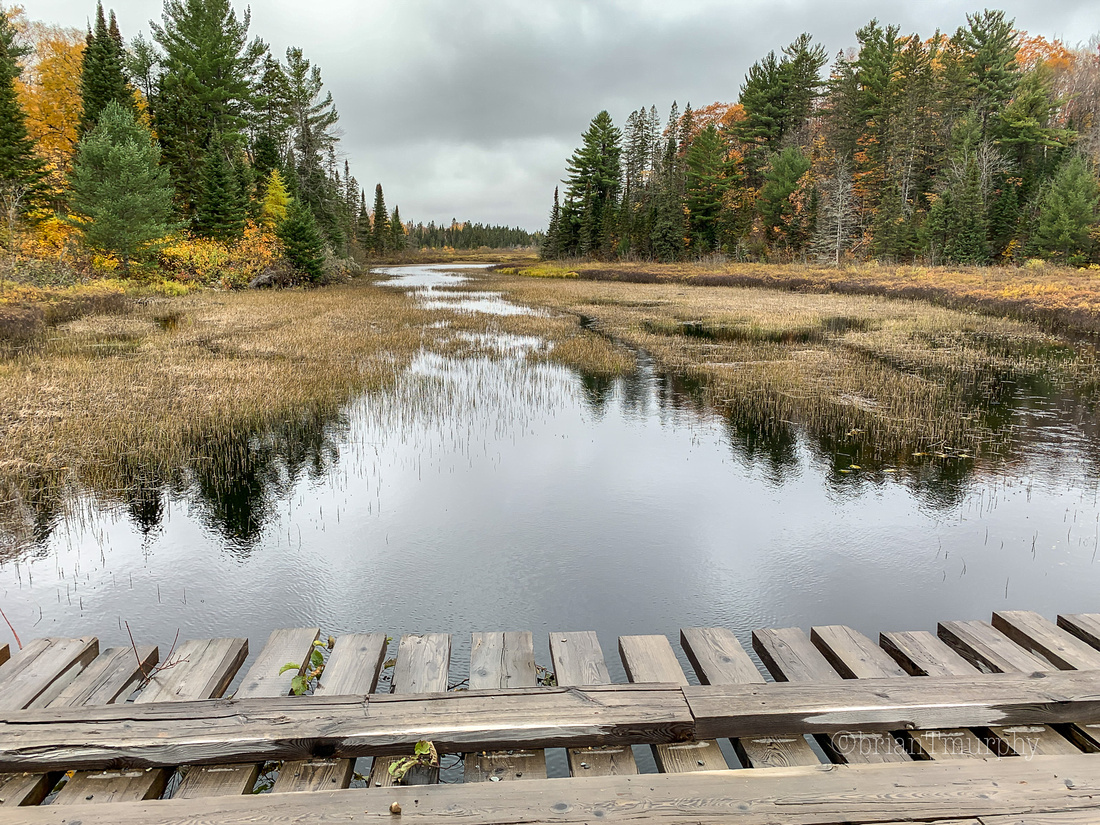 "Three generations of McCormicks, the descendants of Cyrus McCormick, inventor of the reaping machine, held the deed to this area before Gordon McCromick willed the land to the U.S. Forest Service. McCormick Wilderness has recovered from the logging era that ended in the early 1900's. Today, you'll find a mixture of northern hardwoods and lowland conifers interspersed with small patches of towering white pine, Michigan's State Tree. Straddling the divide between Lake Superior and Lake Michigan, this region ranges from nearly level terrain to rocky cliffs. McCormick's water is what draws most visitors, with the Huron, Dead, Pahokee, and the Wild and Scenic Yellow Dog Rivers all have part of their headwaters within the wilderness. Many cascading waterfalls on the Yellow Dog make it unnavigable. The Yellow Dog is one of a few Eastern rivers designated "Wild". Eighteen small lakes add sparkle to the landscape. Trout, pike, and bass live here, but only in small numbers due to the less-than-fertile-waters. The three mile White Lake Trail connects County Road 607 to White Deer Lake where the McCormick Estate once stood. Remnants of old, unmaintained trails can sometimes be found, but the rest of the Wilderness is fairly rugged, isolated, unspoiled, and relatively difficult to access."   USNFS 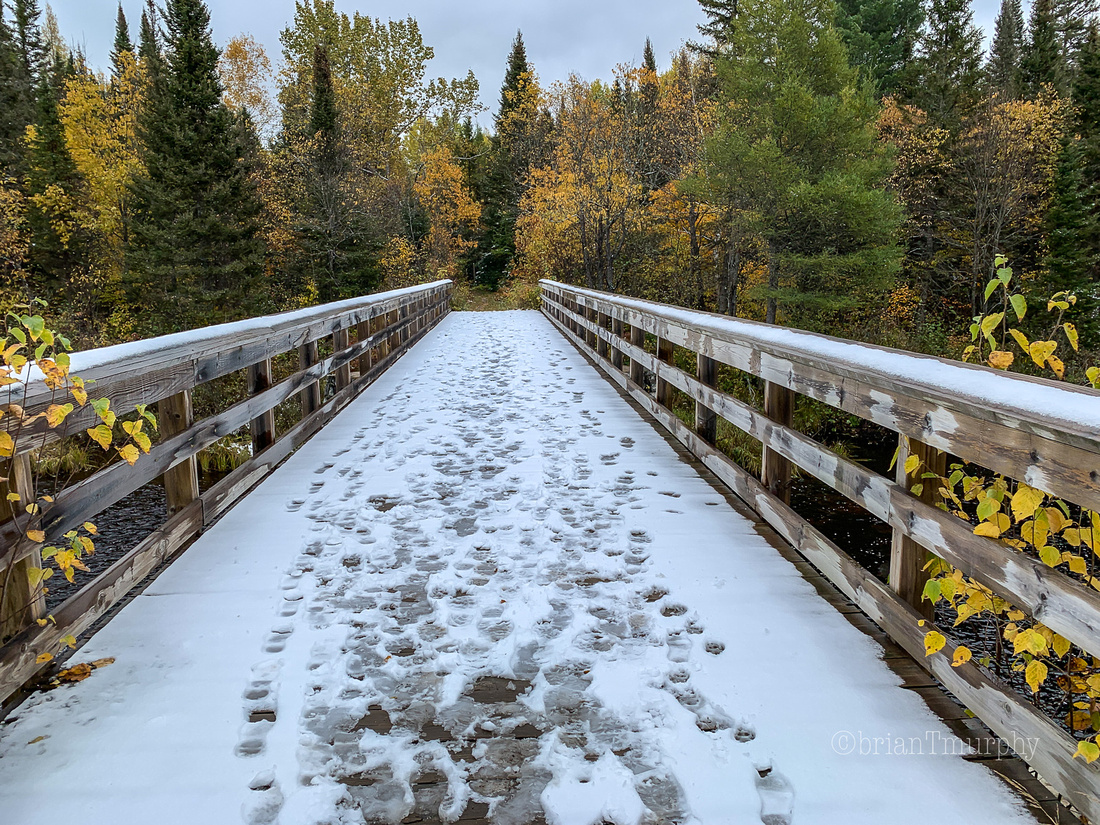 I only walked about 1.5 miles on the trail round-trip, as planned. Now, knowing what to expect, on the next trip I will be prepared for the longer hike. This is not an area you want to go into unprepared. 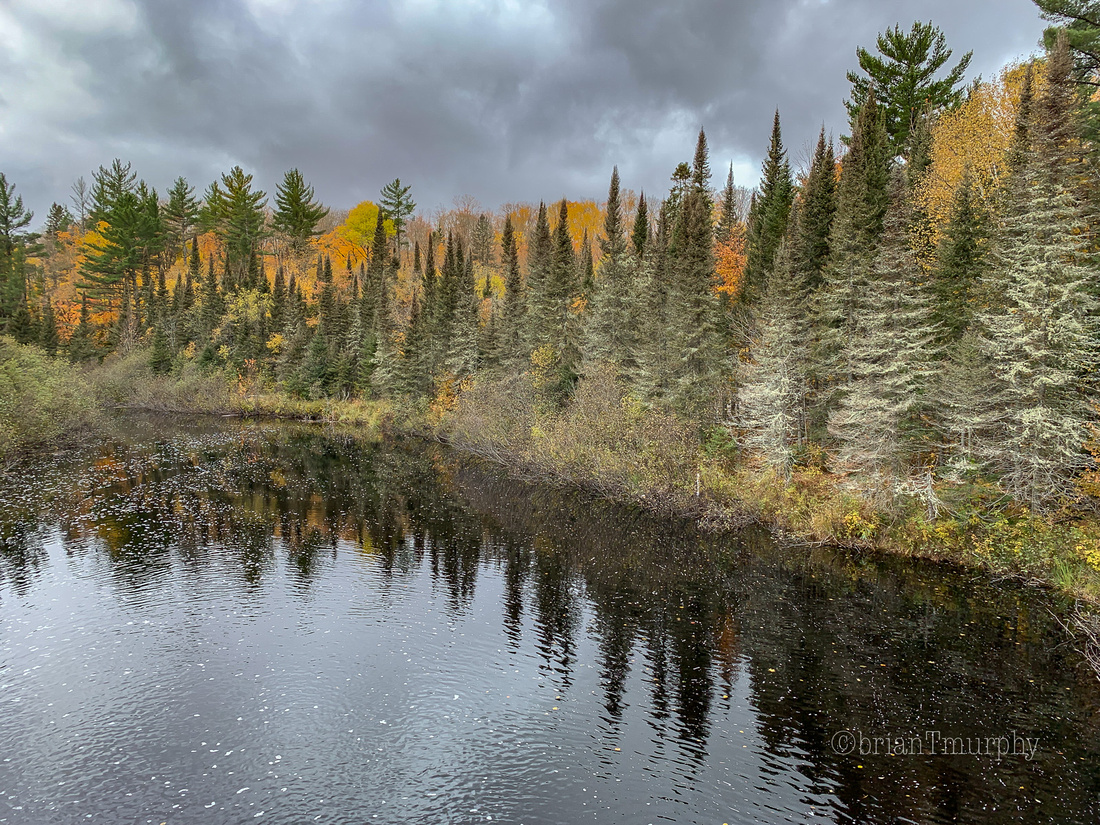 Hope you enjoyed the blog.
There is a place to leave COMMENTS at the bottom of the page.